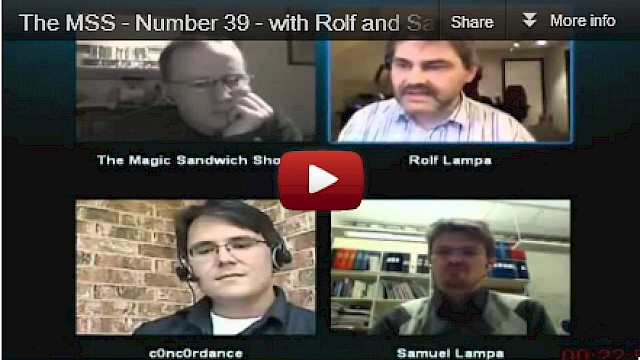 In November 18, two biblebelieving Christians discussed faith the Bible and science with atheists in a UK live blogTV-show named The Magic Sandwich Show.

Not for the faint hearted

Watching a debate with atheists isn't for the faint hearted. Therefore we do not recommend the show for people who don't want to know what questions their children are being asked and mocked for in school, or to those who simply don't want to know what outspoken atheism really is about and how many atheists reason today in order to undermine the trustworthiness of the word of God, and therefore, the Christian faith. The enemy of the truth namely knows full well that  any faith not rooted in the word of God can not be defended.

So our participation in the debate had no other purpose than to give answers to the world about what the Bible teaches about questions being asked by this world. As opposed to what man teaches. Note therefore that as Christians we "wrestle not against flesh and blood" but against ideas, that is, against lies and falsehood of all kinds. Paul says that we "wrestle not against flesh and blood, but against principalities, against powers, against the rulers of the darkness of this world, against spiritual wickedness in high places." (Efe 6:12). Our own ideas tend to burn quickly like hay and straw in such open fire.

Why give answers to your friends?

So why do we take part in a debate like this? There are several reasons. The first reason is that an old colleague to me, with which I (Rolf) have had discsussions about Christian faith through the years, asked me if I would defend my faith in this show. This colleague had started questioning biblical Christianity due to evolution and creation issues. And when he learned that I was the chairman of the Swedish association for creation, Genesis, he wanted me to be on the show. He also wanted my son Samuel to join in. And so we did. Here's part one of three of the debate, in English only:

Another reason for taking part in the show is that I'm not ashamed of defending my faith in Christ and the word of God before the world. It won't render you honor and a good name in this world though but we need to bring God's truth to all people.

For those who are not familiar with how many atheists reason I'd like to point out that the questions they ask often are (but not always, remark) "loaded" with false assumtions. When loaded with false assumptions you should NEVER simply accept trying to look good and go on trying to answer. The reason is that if the assumptions behind the question are false then no answer whatsoever will be correct or satisfying to the atheist. And remember, sometimes (but again, not allways) a question has no other purpose than to mock and make fun of a false representation of what the Bible teaches. Thus, never answer a question based on invalid assumtions without first correcting the false premises and only then go on to answer the question.

Learn from Jesus how he did in such cases. Jesus would not let mockers set the rules for what questions he would answer. If the intent was obviously false or mean, or both, he would not answer a question with less than that the questioner would first answer Jesus' counter question, which of course were designed to openly disclose the false intent behind the first question (example [[Mar 11:29]]).

Here's the second (Part 1A) of alltogether 3 parts:

In a realtime debate it can make you look bad if you reject to directly answer a question. But the "cost" for not answering before correcting the premises is sometimes a must to take, as examplified in [[Mark 11:29]]. Accepting a false assumtion can have a much greater "cost" in that with it's false starting point you may never be able to convey the truth, and that any answer would be an incorrect or even a stupid answer (which is sometimes the very intent behind the question in the first place). And this is the strategy of the father of lies - to press you hard by making you look like a fool to the world if you answer, and a fool if you do NOT answer. So you need to be sober, bold and clear, and of course, well trained and tried and thus actually knowing what and whom you believe in, to handle the trickiest situations. Now, here's the last part of three of the debate:

We hope that all, believers as well as non-believers, would discover that the highest wisdom in this world is to take side with, not us, but with God and the truth and the grace revealed in the word of God.